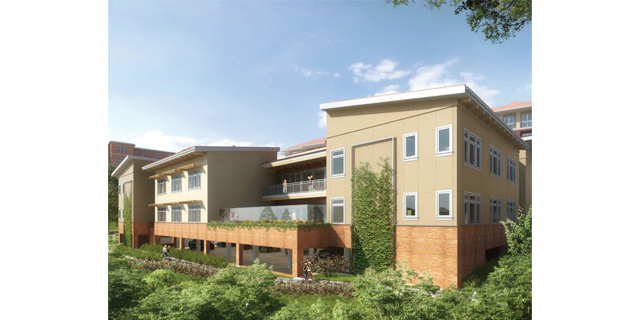 When leaders at the Masonic Homes of California in Union City start talking about the grand opening of the campus’s newest building, they tend to stress the big stuff: That it will be a home for 28 new residents with specialized needs. That it represents a new chapter in the years-long modernization of all the campus’s facilities. And that it adds to the Homes’ growing reputation as a leader in memory care and assisted living.

All of that is true, but when architect and project manager Matthew Smith of SmithGroup thinks about the newly opened Pavilion at the Masonic Homes, it’s the small stuff that his mind focuses on. Take the windows in residents’ apartments. Unlike at some care facilities, these actually open and close. And the cabinetry is a warm wood tone rather than the sterile, white plastic veneer seen in so many medical settings. And individual thermostats let each resident control the setting in their room. “Everything about it, we wanted to be less institutional feeling,” Smith says. “The thing about any housing for seniors is that it be as homelike as possible. That’s what’s driven our approach to the Pavilion.”

That sense of hominess pervades the new building. The Pavilion at the Masonic Homes has 14 well-appointed apartments on each of its two floors. The first floor is dedicated to residents with advanced memory-care conditions, such as Alzheimer’s disease and other forms of dementia. The second floor is given to those requiring high-level assisted living needs, including those recovering from heart attack or stroke. On both levels, the homey studios surround a light-filled and open lounge, dining area, and serving area. Nursing stations are positioned strategically so that staff are easily located and able to monitor and consult with residents as needed—and to provide personalized care according to every resident’s own requirements.

The motivation behind opening the new Pavilion is threefold, says Joseph Pritchard, chief clinical officer at the Masonic Homes. First, the additional apartments help MHC fulfill its promise to residents that they can advance through their lives without ever having to leave the campus to seek higher levels of service. Until now, those with advanced care needs often had to move elsewhere—an especially distressing situation when it forced couples to live apart. By providing those services just steps away, the Pavilion enables couples to stay together even if their health care needs differ.

The second benefit is in relieving the Masonic Homes’ growing waitlist—which in some cases is as long as three years. That wasn’t just a logistical challenge; as Pritchard points out, early intervention is crucial to diagnosing and treating memory loss, and a longer wait means later intervention. With the opening of the Pavilion, residents living in other Masonic Homes buildings can access the level of the care they need, making more apartments available for those able to live independently.

Lastly, the Pavilion operates on a new financial model. Namely, it is open to the entire community, rather than solely to Master Masons and their wives, on a fee-for-service basis. That means for the first time ever, California Masons can direct their non-Masonic family members to the Homes for memory care or high-level assisted living. So, Masons’ fathers, brothers, sisters, and friends are now welcomed—a seemingly simple but meaningful change from the past. (Though Pritchard points out that subsidized Masonic relief recipients will continue to be prioritized.)

Then there’s the setting: Located just above a wooded creek on the edge of the campus, the new building is beset on all sides by bucolic views. Looking west, residents have a breathtaking vista of the San Francisco Bay; to the south, the lush valley formed by the small creek; to the east, the gently rolling Mission Hills. A verdant “memory garden” is just outside the first-floor patio, with flowers and plants providing a relaxing green space to sit or just look over. And only a few yards away, residents have access to all the amenities available through the Masonic Homes and Acacia Creek campus, including a state-of-the-art fitness center, swimming pool, and hair salon. They are also plugged into the larger Masonic Homes and Acacia Creek community, where a focus on lifelong development and successful aging are baked into all manner of programming and services.

As construction was wrapping up on the brand-new space, Christina Drislane, the Masonic Homes director of memory care, could already see in her mind’s eye where the new residents would lounge for coffee, do group chair exercises, and have impromptu karaoke nights.

Asked what makes the Pavilion special, architectural designer Werner Maassen ticks off a litany of subtle design elements. “In the end, it’s really a collection of a thousand things,” he says. “But what they all contribute to is a feeling of being home.”