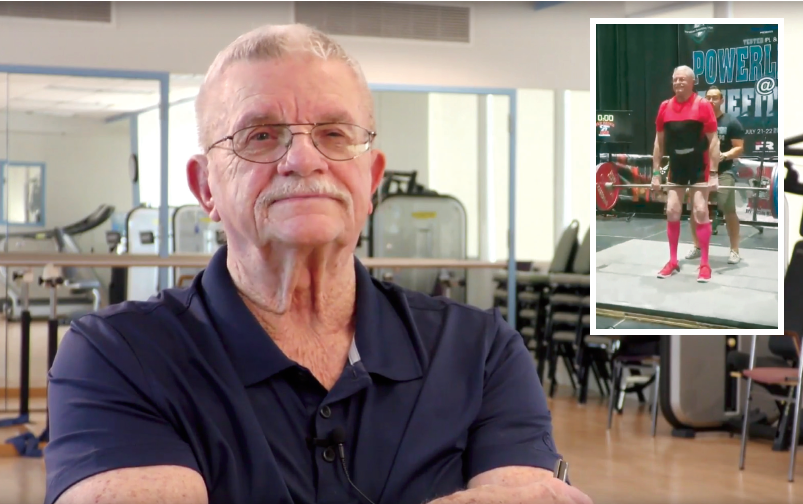 Lifting Spirits and Lots of Weight

Paul McCuistion is direct and matter of fact about most things. So when you ask the 84-year-old how, in the space of just a single year, he went from having a heart attack and using a wheelchair to setting world records for weightlifting, he’s characteristically blunt. “Determination, I guess,” he says.

For all his physical prowess, McCuistion’s mental turnaround has been as remarkable as his feats of strength. And, this February, as the Masonic Homes of California recognizes American Heart Month, it’s a reminder of both the profound risk of heart disease—the number one killer in America—and also our own abilities to push back.

For McCuistion, it started when the former treasury agent suffered a heart attack in 2013. By the time he moved into the Masonic Homes campus in Union City in 2017, he was using a wheelchair and “could hardly take two or three steps,” he says. “I was in pretty rough shape. It was kind of like, ‘Either get up or die.’ So I decided to get up.” Using the campus gym, McCuistion started working out and getting fit. The turnaround was rapid. So much so that by 2018, a fellow Homes resident who was involved in powerlifting invited him to come to his gym and try out some heavier weights. With no special training or practice, McCuistion, at age 83, deadlifted 226 pounds—unofficially, a world record for his age. A few months later, he was invited to his first lifting competition, held in Napa by the World Association of Bench Pressers and Deadlifters. As a complete amateur, he set records for his age in the bench press, deadlift, and a combined contest.

Since then, McCuistion has competed in another half-dozen events, setting even more age records. “I’ve had some humbling experiences doing this,” he says. “People come up to me and say, ‘My God, how do you do it? My dad can’t lift that and he’s half your age.’”

While his experience is extreme, it underscores the importance of exercise—for the body, of course, but also for the mind. Reflecting on his lowest moments in the wake of his heart problems, when McCuistion had lost more than 50 pounds off his muscular 6-foot-1, 220- pound frame, he describes his diminished physicality as a spiritual burden. “People asked if I was depressed, and I was. You’re looking in the mirror and you’re just skin and bones. But I was able to get back and get myself in shape.”

For others, heart-healthy exercise routines can be less intense. The National Heart, Lung, and Blood Institute recommends forming a walking group with friends or enrolling in an exercise class with neighbors, along with eating healthier and tracking your weight and blood pressure.

For McCuistion, the next step is to make history. With his 85th birthday coming up, he says he’ll be able to compete in a new age category this year—meaning a whole new set of records to break.

Visit our New Community at The Pavilion at the Masonic Homes