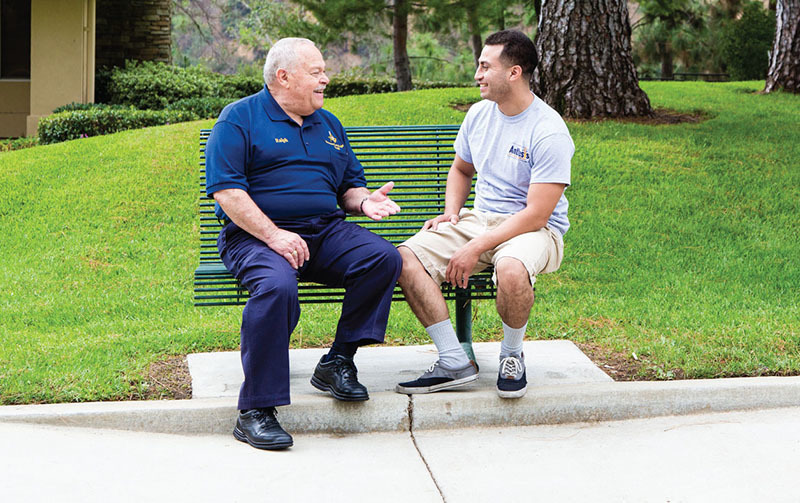 It might be a cliché to say that every lodge is unique, but when your lodge sits on the campus of a retirement community of Freemasons, “unique” is the most fitting word that comes to mind. Along with Destiny Lodge No. 856 in Covina, Siminoff Daylight Lodge No. 850 in Union City blends the old with the new as it works to grow its membership while maintaining its unique identity. “Our problems, our opportunities, and our challenges seem to be different than other lodges’,” explains Jose Larin, candidates coach and senior warden.

With members who have been in the fraternity for 40 or 50 years, both Siminoff Daylight and Destiny lodges enjoy the benefit of experience. But in Union City, that experience might not always include experience with the fraternity. That’s because the Union City campus has two retirement communities: the Masonic Home for Masons and their spouses and Acacia Creek, which also welcomes non-Masonic residents. “We get men from Acacia Creek who never thought about Masonry their whole lives until they moved here,” Larin says. “And then we have members from the Masonic Homes whose lives have been immersed in it.”

In Covina, Destiny Lodge is a relatively new feature of the campus. When the children’s home closed and the Covina Home became exclusively a retirement community, it was time for the campus to have its own lodge. “When my wife and I first moved in [in 2011], some of the men came up to me and asked if I wanted to help create a lodge on the campus,” says Ralph Mulhern, a 78-year-old resident and 44-year Mason. He agreed to help and after two years of hard work, Destiny Lodge was chartered. Like Siminoff Daylight Lodge, many of Destiny Lodge’s members are veteran Masons. “A lot of the residents of the Home are past masters from other lodges. We also have a few former Grand Lodge officers,” Mulhern explains.

Ultimately, however, no amount of experience can make up for sheer energy — something that Destiny Lodge has never struggled with. Although the rigors of serving as a lodge officer can be demanding, Covina residents willingly participate. The problem is that there are relatively few of them. “We only have about 28 Masons living on campus along with their wives,” Ralph says. The lodge needs new members to maintain its vibrancy.

Raised a Master Mason in 2012, 43-year-old Larin has been actively engaged in promoting Siminoff Daylight Lodge in the hopes of attracting new, active members. The lodge has created a new website, Facebook page, and Instagram account to take on the challenge of modernizing. “Now people from the outside can research us online. It gets us exposure.” So far, these efforts seem to be working. More than half of Siminoff Daylight Lodge’s current officers hail from beyond the retirement community.

Their success in finding new members rests largely on the one commodity they have plenty of: knowledge acquired over the decades. For the past six years Manuel “Manny” Gallardo has worked as a chef at the Masonic Home in Union City. When he decided to petition for membership, choosing a lodge wasn’t difficult. “Let’s say I’m looking to become a cook,” says the recently raised Master Mason. “Do I want to go to a place where every other cook there has only been cooking for a year or two? Or, do I want to go to a place where some of these guys have been cooking for 20, 30, or 40 years; where they can really tell me the ins and outs of what I’m doing?”

Larin, Gallardo’s former candidate’s coach, agrees: “To have members with this level of experience is rewarding. They draw from years and years of performing the rituals. That’s the benefit of Siminoff.”

Relying on more traditional methods like word of mouth and hosting public events on campus, Destiny Lodge in Covina has also grown as well. Now, a majority of its members come from the Covina community itself. And, as in Union City, this includes members of the campus staff, who have become immersed in Masonry’s values.

Jesse Alderette, a 26-year-old dietary aid working on the Covina campus, knows a thing or two about Masonic values. His desire to join Destiny Lodge lies in his past. “I resided here in Covina at the Children’s Home for about 10 months back when I was in sixth grade,” he explains. “They really took care of the residents. I have a lot of fond memories here. Now, I want to give back to the fraternity.”

Just initiated in August, Jesse is working closely with Mulhern, who has been the lodge’s candidates coach for the past few years. Although there is a more than 50-year age difference between them, neither Jesse nor Ralph are too concerned. In fact, at both lodges, the age gap between the residents of the campus and the incoming Masons is not top of mind. “Honestly, I didn’t even think about it,” admits Alderette.

The key to making it work, Mulhern explains, is to meet candidates on their own level. “Everyone is different,” he says.

Ultimately, the challenge of integrating younger Masons into a lodge that prides itself in the experience — and age — of its members, isn’t a challenge at all. At the end of the day, these lodges are a reminder of an important tenet of the fraternity: brothers entering a lodge are to treat each other with warmth and respect, regardless of background, race, creed — or, yes, age.